Bernie Sanders and the Blue Wall 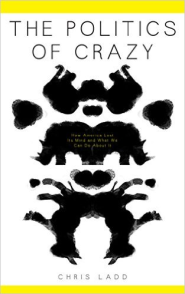 The Politics of Crazy, available at Amazon

A pattern was evident in the results from the 2014 Election. Though the prevailing narrative focused on the number of Republican victories, a close look at the map revealed the culmination of a long, dangerous trend for the party. Those GOP victories were highly localized to a geographic bloc containing relatively few electoral votes. A Blue Wall was emerging that Republicans could not breach. Behind that wall lay enough Electoral College votes to lock Republicans out of the White House for the foreseeable future.

Democrats enthusiastically embraced the idea, delivered by a Republican blogger, that they couldn’t lose the 2016 Election. Lawrence O’Donnell read from the Blue Wall post on his MSNBC show. References to the Blue Wall show up daily in comments sections and message boards all over the Internet. Nate Silver considered the idea, expressing concerns that the concept was unsupported by polling.

Our world is complex and full of surprises, making predictions perilous. Democrats seem to have taken the news of their good fortune less as an opportunity than a challenge. Here’s the campaign slogan that most honestly expresses how Bernie Sanders would alter the logic of the Blue Wall: “Sanders 2016: Your Only Way to Lose.”

Bernie Sanders would break the Blue Wall in a way that no Republican could – from the inside.

Just as Republicans a generation ago threw away their chance at decades of political dominance, Democrats may be poised to follow the same path. To understand why, it might be helpful to examine the dynamics that shaped the Blue Wall and how Bernie Sanders is a kind of ‘perfect storm’ for Democrats.

Here’s the most critical thing to understand about the Blue Wall – it was not built by Democrats, but by Republicans. The Blue Wall rises from an incidental coalition of voters unimpressed with liberal politics, but disgusted by the increasingly racist and theocratic rhetoric from Republicans. Three critical voting blocs give the wall its character – African-Americans, Hispanics, and affluent urban/suburban voters (Blue State ticket-splitters).

The three groups that give the Democratic Party its resilience are united not by liberal political leanings, but by their disgust at Republican race-baiting and religious fundamentalism. Though Democrats are friendlier to minorities, at an institutional level they have only marginally more comprehension of or sympathy for black and Hispanic communities than Republicans. Issues of the highest priority to minority communities always take a back seat to the interests of union leaders and white progressives.

This means that minority communities find themselves voting Democratic out of a lack of options, a particularly acute dilemma among black voters. As urban communities struggle against resistance from public employee unions to get the vital public services they so desperately need, these tensions are rising to the surface. Black Lives Matter in particular finds itself facing its most immovable resistance inside the Democratic coalition.

This beats the treatment African-American voters receive from Republicans, but still leaves them frustrated. Much of the support that Democrats enjoy is a gift from Republicans who drove minority constituents away. Few Democrats recognize that dynamic, leading them to assume that the loopy ideas of leftist college students must automatically be shared by the rest of the Democratic coalition.

To win upwards of 70% of Hispanic voters and almost 95% of African-Americans you have to bring into your coalition millions of voters who are effectively holding their noses. Half of black and Hispanic Democrats identify ideologically as conservative or “mixed.”

Take a glance at comments by Sanders supporters online about their…ahem…’less enlightened’ black and Hispanic brethren and the outline of this problem becomes apparent. These voting blocs dislike each other a great deal more than either Democratic or Republican insiders recognize. White progressives are particularly oblivious to this fault line, imagining that their adoption of politically correct language and their support of a generous welfare state is more than enough to earn the warm gratitude of minority voters. Sanders is a kind of perfect storm, exposing in a sometimes ugly way the limits of minority influence in the political party they’ve committed to support.

Black voters in the US have a very unique relationship to the political system. The average black voter is far more politically active, motivated and informed than a peer of similar income and education in other groups. Why? Because politics has consistently been a matter of life and death for them. They aren’t screwing around. This is not entertainment.

While affluent white college students get all starry-eyed over folk-singer rhetoric, black voters care intensely about outcomes. They demand effectiveness. Despite their deep commitment to the Democratic Party (or perhaps because of it?) black interests always lose to the pet projects of affluent, privileged, white progressives. Black voters, especially in the country’s big cities, are growing bitter.

For Bernie Sanders to take the nomination on the strength of white progressives, especially college students, would rub salt in an already very raw wound. Black and Hispanic voters, weary of being taken for granted, are already feeling the Bern. It’s leaving them chafing.

Trapped between a Republican candidate hostile to their interests and a Democratic candidate oblivious to them, the Democratic nominee can still count on strong support. However, maintaining the Blue Wall requires more than “strong support” from minority voters. Obama carried barely 40% of white voters in 2012. Nothing short of dominant support and turnout in minority communities will hold the Blue Wall in place.

Democratic success among the last component of the Blue Wall, urban and suburban whites, is even more brittle. These consistent ‘split-ticket’ voters are the reason that Blue States like Michigan, Pennsylvania, Wisconsin, Minnesota, Illinois, Maryland, and Massachusetts frequently elect Republican Governors or Senators while almost always supporting Democrats for President. These voters are relentlessly moderate and in Blue Wall border-states they can account for a 10-15% swing, defeating liberal Democrats in favor or moderate Republicans on a consistent basis.

If Republicans ever stopped pandering to racists and religious extremists, these voters would switch sides quickly. If Democrats nominate a ‘Democratic Socialist’ from Vermont, these voters will be in play regardless of who the Republicans nominate.

Just like black and Hispanic voters, Blue State ticket-splitters are frustrated by the power of urban Democratic political machines and deeply hostile to the Democratic Party’s delusional left flank. They have increasingly supported Democrats in recent years as the DLC-style Democratic politics of the Clintons has become the norm. They prefer pragmatism over ideology in almost every case. Faced with a choice between a wacky, delusional Republican promising to slash their taxes and a wacky, delusional Democrat promising to take more of their money for pie-in-the-sky projects, their political direction becomes impossible to predict.

Some of the dynamics that created the Blue Wall will also serve to limit the odds of a Sanders nomination. However, not all of the groups that comprise the Blue Wall are active in Democratic primary politics. Many of those white split-ticket voters in Blue States vote in Republican primaries. Others are relatively disengaged from primary politics. Black and Hispanic voters active in the primaries generally lean farther left than their peers who turn out for the general election.

Worse for Democrats, Sanders brings the ‘Politics of Crazy’ into the Democratic Party to a degree we haven’t previously seen. As social capital institutions weaken all over our culture, remaining institutions like our established political parties struggle to hold back a tide of extremism and general nuttery. That drift toward the extremes could overwhelm the Democratic institutions that would otherwise block Sanders’ rise.

Would Bernie Sanders lose the General Election? Not necessarily, but Sanders is the only Democrat in the race who could lose the General Election. It would be difficult to conjure from imagination a Democratic candidate less suited to sustain the Blue Wall. Combine that problem with the significant possibility that Republicans will have a Hispanic at the top of their ticket and you see the weakness emerging.

Even with Clinton as the nominee it was going to be difficult for Democrats to maintain the near-unanimous black support Obama generated and deepen their gains among Hispanics. Lose Clinton, with her deep institutional ties to those communities and her massive embedded support, and the Blue Wall no longer holds.

Would minority voters shift their support to a Republican in large numbers if Sanders were the nominee? Probably not. But these are the communities whose commitment and turnout built the Blue Wall. A 10% fall-off in support and turnout among these voters would be a catastrophe, especially when you consider the impact of an untested, unvetted, socialist from Brooklyn on split-ticket voters in Blue States.

Sanders might be competitive in a general election, but only if Republicans remain determined to nominate the most obnoxiously unelectable candidate they can find. That might change if the party perceives an opening. If it looks like Sanders could take the Democratic nomination, delegates assembled in Cleveland would have all the incentive they need to carry out a Republican ‘Red Wedding’ at the convention. With Sanders as the potential Democratic nominee, Republicans aren’t going to be so generous as to nominate Donald Trump.

The Blue Wall analysis has a weakness – The Democratic Party. Bernie Sanders, as the nominee, would break the wall from within, making the outcome of the November election an open question.

312 comments on “Bernie Sanders and the Blue Wall”