Home › blue wall › How to end a party

How to end a party 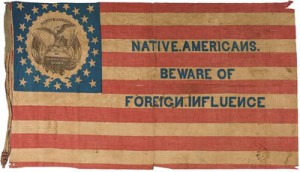 This has been a tough few weeks for Republicans. Donald Trump is emerging as a far more complex threat to the party’s viability than most people had initially recognized, your humble blogger included. There remains almost no possibility that the man can secure the nomination and he probably lacks the attention span to launch or sustain an independent bid. This offers no comfort as viability is not what makes him dangerous.

Our two-party system has been more or less stable since the Civil War. For all the difficulties the GOP has faced in the past decade and a half, few have imagined that the party might be forced into an open realignment or outright dissolution. The increasing influence of bizarre, erratic fringe-characters like Michele Bachmann, Herman Cain, Ron Paul, Ted Cruz and now Donald Trump is a symptom of wider problems in our political system that are weakening both parties.

Trump’s naked racist appeal threatens to topple a domino that could force the GOP into an open split and a full rebranding. Though rare, there is a precedent for this phenomenon in the Republican Party’s own history. That precedent is based on a sort of political physics built into the foundations of our system. A political party in our system can survive many calamities, but once it loses the ability to compete for the White House the pressure toward dissolution is impossible to check.

Throughout our history Republicans and their forerunners have occupied the second slot in the two-party system we inadvertently inherited from the British. Under the influence of Jefferson, Democrats coalesced around the interests of farmers, labor, and Southern planters against the emergence of capitalism. Led originally by Hamilton, the Federalists, Whigs, and then Republicans primarily channeled the interests of tradesman, merchants, industrialists, and professionals. Their priorities were the promotion of trade, commerce and national expansion. By virtue of these alignments, Democrats have consistently enjoyed an advantage of numbers while Republicans enjoyed better funding, a more coherent ideological platform, and far superior organization.

Our last major party realignment emerged from the collapse of the Whigs in the 1850’s. For decades Whigs struggled to hold their capitalist coalition together. Their greatest challenge was a North-South division over the appropriate response to slavery, but other fractures complicated this controversy.

As the nation grew, Northern Whigs were increasingly pressured by a virulently anti-Catholic, anti-immigrant fringe. Nativists spread increasingly outlandish conspiracy theories about the character and intention of new arrivals. They pushed for a crackdown on immigration, stirring up riots in Northern cities and organizing campaigns of systematic discrimination.

In 1852 the Whigs declined to re-nominate their sitting President, Millard Fillmore. He had assumed the Presidency on the death of Zachary Taylor in 1850. Fillmore helped complete the Compromise of 1850 which opened up new territories to slavery and forced Northerners to cooperate in the apprehension of runaway slaves.

Tensions in the 1852 convention helped forge a galaxy of smaller new alliances that ripened into rival political parties. Whigs would not nominate another candidate for President. Out of the wreckage would emerge the Constitutional Party, the American Party, the Know-Nothing Movement, the Native American Party, and the Republican Party.

That doesn’t mean they have to win consistently. It means they have to be capable of credible competition.Failing to compete for the White House opens up such a wide, inviting political opening that a party split becomes almost impossible to halt.

Between Reconstruction and the Great Depression there were only three Democratic Presidents, but the party was competitive in almost every election. Conversely, Republicans were shut out of control of Congress for sixty years in the 20th Century, but the party remained vital and influential through the entire period. After Roosevelt’s death, Republicans held the White House roughly as often as the Democrats for the rest of the century.

There hasn’t been a period since the 1850’s in which one of the two major parties has weakened to the point that it could not field a credible contender for the Presidency. Modern Republicans are flirting with this distinction. It is already clear that the GOP is effectively locked out of a credible shot at the 2016 Election and probably also the 2020 race by virtue of basic demographics. Republicans have built a political platform so skewed toward the interests of a dying, rural, Southern white base that it cannot be adapted to compete nationally.

The flight of the Dixiecrats into the Republican Party in the last third of the 20th century was a brief political shot in the arm that, over the long term, has crippled the party’s national appeal. As with the Whigs in the 1850’s, it has proven impossible for Republicans to reconcile the racially-tinged, anti-commercial conservatism of the South with the capitalist vision that has animated the party from its origins.

Like the Whigs before us, Republicans are being split by a regional dynamic. A sudden influx of Southerners animated by appeals to cultural supremacy is changing alignment of the party nationally. Dixiecrats have tipped the party’s internal balance, robbing the party’s once-dominant commercial wing of its ability to contain the influence of nativists and other paranoids elsewhere in the county. This is where Trump threatens to blow up the entire enterprise.

Donald Trump threatens to openly and successfully unite the nativist fringe in the country at large with the priorities of racial conservatives in the South. It will probably not be enough for him to gain the nomination. The mostly likely outcome for Trump himself is still some manner of spectacular flame-out after a campaign that only lasts a few months, but the longer his candidacy lasts the stronger his legacy will be.

As long as he remains in the race, Trump forces Republicans to sort themselves very openly along racist lines, abandoning a game we’ve played since Nixon. In recent decades the party has come to depend more and more on the support of a racist fringe while remaining officially aloof from their politics. With each passing year the veneer has thinned as the racist appeals have become steadily less a game and more a matter of policy. Trump could end the charade.

No credible contender in this Republican field has demonstrated the character or courage to refuse to play this game and condemn those who do. Candidates are left to fight back by complaining of Trump’s “tone.” Sen. Ted Cruz has gone so far as to support Trump’s rhetoric. No Republican candidate is likely to stand up and deride Trump’s clumsy racism. None of them possess the language or insight required to fight back effectively.

Trump’s campaign is unleashing forces that will make it impossible for the GOP to nominate a nationally competitive candidate for the foreseeable future. His campaign threatens to weld together interests that will force any Republican Presidential nominee to embrace a white supremacist message that cannot sell in a national election.

If we allow ourselves to be robbed of national relevance, the political physics becomes relentless. There remains a hope that some figure could emerge in the next few years with the ability to transcend white nationalist fears. Perhaps someone in the mold of Marco Rubio, but with a more realistic understanding of modern America and a stronger moral spine. There is also the possibility that the Democrats will come to the GOP’s aid by imploding on their own. Sen. Sanders’ campaign suggests that Democrats are beginning to suffer from the same institutional breakdown that has weakened Republicans.

Donald Trump does not need to win a single primary to cripple the Republican Party. Until someone in the GOP finds the courage to fight back against racist politics, the damage will spread. History makes clear that this brand of politics can force a party to rebuild itself from the ground up. Maybe that isn’t such a bad thing.

On a counter-note, some claim that the road goes on forever and The Party never ends: