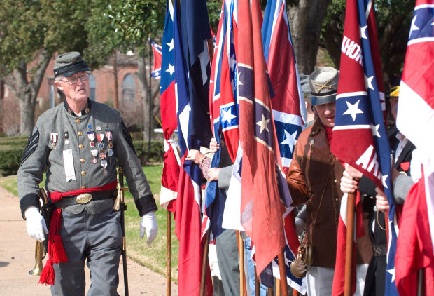 Robert E. Lee’s birthday, January 19th, has been a minor state holiday in Texas since 1931. Amid rising calls nationally for a celebration of Martin Luther King’s birthday, the Texas Legislature responded in 1973 with the sort of passive-aggressive hostility so common in the late Civil Rights Era. They consolidated Lee’s and Davis’ birthday holidays into a celebration of the Confederacy which, by pure happenstance of course, would fall at almost the same time as King’s birthday, January 15th.

That little piece of spite on the part of the Legislature happened in an era of one-party Democratic rule in Texas. Republicans are fond of pointing out that Democrats ran the South throughout the Civil Rights Era and were responsible for many of the worst of the atrocities carried out against African-Americans. So, here’s a chance for my fellow Republicans to put some capital behind their rhetoric.

Perhaps it would be a valuable good-faith gesture for the Legislature to simply move Confederate Heroes Day to line it up with similar commemoration dates in other states later in the spring, usually in April. It would acknowledge the Democratic legislature’s poor motives in setting the date in January and emphasize the state’s commitment to Dr. King’s legacy and memory under a new, more enlightened Republican regime.

This will not happen. The reason it will not happen is that the Republicans who hold single-party rule in Texas now are the heirs of single-party Democratic rule back then. In fact, some of them are literally the same people sitting under a different party banner. Something as innocuous as attempting to change the date of a holiday hardly anyone knows exists would bring the rats out the woodpile. They would place relentless pressure on Republican politicians not to “back down” to “political correctness.”

That is the state of the Republican Party in a nutshell. Meet the new boss, same as the old boss.