How Clinton Could Win Texas 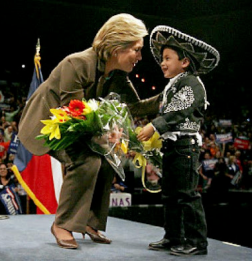 (And Why It Isn’t Good News for Democrats)

Those who predicted a close election in 2016 are starting to retreat. It’s early to get reliable polling, but even at this stage you can draw some conclusions from large or anomalous numbers. All the large numbers are pointing in Clinton’s direction.

Though margins will certainly oscillate over the course of the fall, this isn’t going to get close. When a candidate is this bad the dynamics of the race change in some strange ways. There’s a solid chance that Clinton might even win Texas.

Should this happen, Democrats will be tempted to paint that outcome as a mandate or a trend. That would be a mistake.

The factors that could flip Texas have nothing to do with Clinton’s appeal or any softening of the state’s political bent. Here’s why Clinton might take the state in November and why Democrats should see it as a warning rather than a triumph.

Trump is the most unpopular major party nominee in modern history.

Trump won barely 44% of the vote in the GOP primaries. Since the modern primary system took shape, no major party nominee has won with a lower vote share. After a disastrous convention, Republicans are fleeing from their embarrassing nominee. Even Goldwater, who was a famously contentious candidate, did not spark the kind of rush for the exits we are seeing in 2016. Trump has inspired an unprecedented degree of animosity from within his own party.

Barely a quarter of Texas Republicans supported Trump in the primary. Open resistance from the Bush family and Ted Cruz has created powerful cover for Republican dissenters in the state. Sinclair Lewis once said that Fascism will come to America wrapped in a flag and carrying a cross. Trump has struggled with Texas conservatives who would prefer a slightly smaller flag and an enormously larger cross. Trump is simply the wrong kind of bigot for Texas. Only in Utah is Trump more unpopular with hard-core conservatives.

Republicans in Texas have the option of rejecting Trump by voting for another ticket packed with Republicans. Libertarians nominated experienced, sane, popular Republican former-Governors for President and Vice President. That Libertarian ticket should attract double-digit support in Texas.

Texas is very nearly a majority-minority state. Despite demographic challenges, Republicans have dominated elections there in part because the state consistently ranks near the bottom in voter turnout. Hispanic voters in Texas are among the least engaged Hispanic voters in the country. Trump offers Democrats a golden opportunity to organize a community that has been alienated from politics. If eligible, registered, Texas Hispanics voted at a rate in line with Hispanics elsewhere in the country, Democrats would gain an extra 4-5% of the vote in 2016.

Previous Republican nominees might fail to earn enthusiasm from some portion of the party’s base, but in a close race voters consolidate their support by November. For years we’ve heard mythical tales of the voters turned off by the failure of the party to appeal to their pet concerns. Now we’re going to see what that would look like if it actually happened.

This is not a close race. Republican voters frustrated with their choices will have nothing to gain by lining up behind their miserable candidate in November. With no chance to influence the outcome by voting for Trump, they may use their vote (or their non-vote) to express their disgust. In Texas, the factors cited above will likely be enough to create a sizable dissent-vote for the Libertarians, a large chunk of Republican non-votes, and impressive activism from Democrats.

If Clinton flips Texas expect to see a lot of ink spilled describing the implications of this landmark Democratic mandate. Ignore it all. Clinton will not win Texas by becoming the first choice of Texas voters. It is highly unlikely that she would earn more than 45-47% of the vote there even in a victory. A Democratic win in Texas would be a statement about the Republican Party, not the Democrats.

A landslide so large as to turn Texas blue in this election indicates the collapse of the Republican Party’s national relevance. As Trump’s supporters convert the GOP into a white nationalist institution, the Presidency loses its importance. A white nationalist party can only be a regional, not a national force. Absent a fundamental reconstruction of the party, future Republican nominees, just like our nominee this year, will carry all the gravitas and relevance of the Green or Libertarian candidates.

This is not good news for Democrats, but rather a destabilizing event for our entire political system. We can no more sustain a single-party system than a three or four party system.

Democrats are no more popular than they were ten or twenty years ago. A Blue Texas is a not a victory for Democrats, but rather a warning that the foundations of our political system are cracking.

112 comments on “How Clinton Could Win Texas”