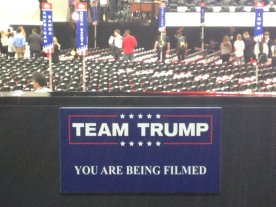 Republicans yesterday took our first big step toward Making America a Banana Republic Again by launching a national party convention made for daytime TV. There was only one achievement worth noting – we got through a whole day and no one has been assaulted. Threatened, yes, but actually assaulted, not quite yet. Since these people never deliver on a promise, threats don’t really count.

A soap opera actor speaking from the main stage contrasted Trump with Obama by explaining that Trump is someone who “shares my faith.” Afterward he explained that cryptic line by claiming that Obama is a Muslim.

Convention leadership steamrolled past a valid parliamentary motion to force a floor vote on the convention rules.

Colorado and Iowa delegations walked out after organizers ignored their petition for a floor vote. Both have returned, but hinted that more is coming.

There are 17 black delegates to the RNC. That’s 17 out of 2472. You have go deep back into the Jim Crow Era to find a major party convention with less minority participation. In 2004 African-Americans were almost 7% of the RNC’s delegate pool.

On a TV news panel, Iowa Republican Rep. Steve King went full racist, questioning whether any of “these sub-groups” had made contributions that compare to white Americans.

Somebody punked Melania Trump in an ugly way, inserting a couple of paragraphs lifted almost verbatim from Michelle Obama’s 2008 DNC speech. This could have been passed off for what it was, a nasty prank by a speechwriter who has presumably now fled to Ecuador. Frankly, the whole thing might have made her seem more human and sympathetic. However the StormTrumpers, being a tribe of ugly trolls, have instead deflected, lied, contorted, and then lashed out, making this stupid low-rent incident the defining moment of day one. Incompetence magnified.

The building was largely empty for much of the night. The only semi-serious political figure slated to speak on Monday, Iowa Sen. Jodi Ernst, was relegated to a late spot addressing an abandoned convention hall.

Tonight Paul Ryan is supposed to preside over a state-by-state roll call to nominate Donald Trump. It’s the only event of the week that might be interesting in an un-ironic way.

This is a good time to revisit the collapse of the predecessor to the GOP, the Whigs. Here’s a review of the Whig’s last convention as a competitive party, in 1852.