The Atlantic discovers the Politics of Crazy 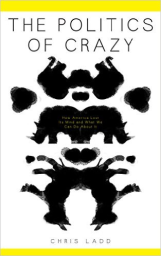 Something important happened this week. No, not that other thing. Jonathan Rauch at The Atlantic published an extraordinary essay on the disintegration of our political system. This may be the first instance in which a first-tier commentator has addressed the concepts described in the Politics of Crazy. The results were promising in the sense that our commentariat may finally be waking to this trend. It was frustrating in the narrowness of its scope. It was downright disturbing in the reforms it suggested.

The community around the Lifer blog will immediately recognize this warning from Rauch about the potential lunacy of the 2020 election:

As the presidential primaries unfold, Kanye West is leading a fractured field of Democrats. The Republican front-runner is Phil Robertson, of Duck Dynasty fame. Elected governor of Louisiana only a few months ago, he is promising to defy the Washington establishment by never trimming his beard. Party elders have given up all pretense of being more than spectators, and most of the candidates have given up all pretense of party loyalty. On the debate stages, and everywhere else, anything goes.

Rauch’s greatest contribution in this fantastic article is his observation that Democrats face the same forces of insanity as Republicans. To my knowledge, no prominent writers in mainstream media have acknowledged this deeply distressing reality and no one in mainstream politics has begun preparing for its implications. This sentence from Rausch is probably already ringing in the ears of the community around this blog:

Needless to say, your author saw this as a vindication. Rausch is recognizing a phenomenon bigger than “anti-establishment anger” or a supposed reaction from an overlooked, disenfranchised class. He acknowledges that we are experiencing a form of systemic political dysfunction that demands a thoughtful response.

Rauch’s diagnosis of this problem represents a break from the Politics of Crazy:

Our intricate, informal system of political intermediation, which took many decades to build, did not commit suicide or die of old age; we reformed it to death.

Rauch attributes our previous democratic stability to a class of “intermediaries,” political insiders who greased the wheels of the system. Their competitive interaction, undemocratic as it generally was, balanced the extremes of individual ambition and steered the system toward relatively practical outcomes. Rauch organizes his essay around as series of poorly conceived reforms. Paragraphs are laid out as “we reformed pork” and “we reformed closed-door negotiations,” on the way to attributing our present mess to those steps.

We disagree on the essential character of this phenomenon. He sees the collapse of the middlemen as a policy mistake to be remedied at a policy level. By zooming out a bit further, the Politics of Crazy sees the death of the middleman as a necessary evolutionary step, one consistent with an emerging environment in which people are freer, more prosperous, and generally more competent than ever before to handle a wider range of self-government. Instead of trying to cram ourselves back into a historical model, we need to evolve new institutions to serve changing needs. Bury the middlemen with dignity and move on toward a brighter future.

In describing the impact of what Rauch calls “chaos syndrome” he accomplishes something that seems to have eluded my previous posts on the Politics of Crazy. He has explained very convincingly why “this time is different.” It isn’t just the accelerating speed of technology or the end of the Cold War, factors described in the Politics of Crazy, which make this situation unique. What makes this disruption more potentially lethal is the way it has crushed the channels through which our political system reforms itself.

Where Rauch’s “chaos syndrome” better describes our situation than the Politics of Crazy is its illumination of the impact of these transformations on our political machinery. Rauch’s piece is a masterly description of the processes that derail competent policy making in the present climate. It only fails in its limited scope. What we see unfolding in our political system is a consequence, not a root, of our challenge. No response can be effective without an awareness of these wider evolutionary forces.

With its limited focus on Washington politics, Rauch’s near-term prescription for chaos syndrome is firmly at odds with the recommendations in the Politics of Crazy. Rausch summarizes his diagnosis as follows:

Our most pressing political problem today is that the country abandoned the establishment, not the other way around.

Rauch suggests measures to strengthen the existing buffers against democracy in the current system. Insulate his class of middlemen from external meddling, give political parties a freer hand to operate, give party insiders more say over the nominating process, and so on.

Viewed through the lens of the Politics of Crazy, the danger of these measures becomes apparent. If we got to this point via a series of ill-conceived or poorly implemented reforms, then it makes sense to simply step back from those policy decisions. If we got here via an evolutionary shift in our economy, culture, and politics, then trying to cram a lid on that massive transformation is beyond futile. A prescription that seeks to preserve an antiquated model of government by insulating it from feedback could lead to an explosion.

In contrast to Rauch’s diagnosis, the Politics of Crazy sees our situation as global, evolutionary, and on the whole a positive human development. Reforms should not seek to halt this devolution of power, but adapt around its demands.

Governing people who are better informed, wealthier, more educated, and freer than any generation in human history does not call for a thicker layer of middlemen, but a more nimble style of government. On the policy side, this means crafting legislation that relies less on centralized, expert oversight for its effectiveness. Instead of issuing thousands of pages of new gun regulations, impose licensing and insurance requirements. Rather than more heavily regulating energy, implement a carbon tax with trading options. A byzantine tangle of social services could be replaced with a universal basic income. Using libertarian-influenced, market-driven policy tools we can continue to accomplish the goals of central government without needing the level of professionalism or oversight of 20th century, Weberian bureaucracy.

At the social level we can constrain the Politics of Crazy by leveraging the same technical developments that are demolishing our existing social capital institutions. New social institutions already evolving from communications innovation offer to fill some of the gaps left by the death of social capital. These new institutions will never be a one-for-one replacement of older institutions and will not support the same style of politics we experienced in the past. They can, however, allow us to retain feedback mechanisms critical for representative government. Social capital derived from new media will not save our old institutions, but they could allow us to build new ones, better suited for an emerging environment.

Contrasting Rauch’s chaos syndrome with the Politics of Crazy points to one concern above all others – the brightest minds of our commentariat have grown disturbingly disconnected from larger social trends. Rauch’s piece is outstanding; far better conceived, written, and assembled than the Politics of Crazy. Yet it fails to recognize a wider social picture which should be immediately apparent beyond the coastal northeast.

Nevermind trying to grasp events in such incomprehensible backwaters as Kansas or Alabama, a political figure with a passing exposure to commerce in the Bay Area should be able to recognize the enormous scope of devolution unfolding around us. One ride with Uber should allow a Washington or New York-based political commentator to recognize that his death of middlemen is a global social phenomenon rather than a consequence of specific political reforms. Reforms did not destroy the middlemen. Wider evolutionary forces rendered them less relevant and valuable, making those reforms possible in the first place.

Events are overtaking our existing institutions, threatening tremors far more disruptive than Donald Trump or Brexit. Like Rauch’s middlemen, our finest writers and thinkers have a critical role to play in our adaptation to these trends. They are trailing these trends badly, and even the earthquakes shaking their own journalistic institutions have not yet been enough to wake them up.

Rauch’s piece is exciting because it might point to a much-needed awakening of interest in these wider forces, but it is only a start. Hopefully others will look beyond the symptoms Rauch identified in pursuit of their wider social causes. Perceiving that larger picture, we may recognize a far more hopeful reality and begin reckoning with the impressive demands it places on our system.

255 comments on “The Atlantic discovers the Politics of Crazy”