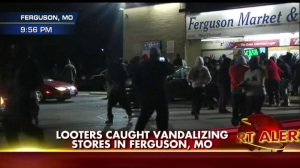 Over the past few weeks Fox News has been crammed with images of looting. Only one kind of looting by only one kind of looter will show up there – the kind that has the least effect on society, committed by our least powerful citizens that nonetheless generate the deepest innate fear in old white people.

Images of black men taking stuff work like crack on certain brains. Many of us have evolved to see an entire movie in that one picture, and it’s a racist horror flick.

The emotional response to those pictures plays a vital role in obscuring the obvious truth behind them, the reality we must grapple with if we want to accomplish anything useful over the course of our generation. America has a serious, long-term problem with looting and we are utterly obvious to its shape and its implications.

One picture more than any other summarizes the looting that limits our economic potential, undermines the social compact, and leaves us struggling to compete in a globalized economy driven by human capital. Real looting, the kind that reshapes our communities and blunts our national potential looks like this:

From Vox and the Pew Center

The spectacular wealth gap between white and minority households is the lingering fingerprint of generations of systematic, legally sanctioned looting. That looting has not ended. We are no closer to acknowledging it or doing anything about it than we were a generation ago.

Capitalism does not thrive in an atmosphere tainted by violence and extortion. Wherever the parties to a potential transaction are operating at a permanent, systematic power disadvantage that cannot be remedied by personal efforts to improve the value they bring to the transaction, capitalism will fail to deliver the best potential outcomes. That’s what is reflected in our statistics on wealth accumulation. From Ferguson to Cleveland to Staten Island we are seeing outcomes that reflect the realities in that graph.

What would the American economy look like if there were no wealth gap between white and minority households. When we think about that this country needs in order to produce greater economic growth and prosperity, that should be the first idea that comes to mind.

We have made progress in dismantling the legal and political infrastructure constructed across hundreds of years in this country for the purpose of looting wealth from minorities. Our future potential will be defined by our continuing progress toward that goal. Whoever claims to care about business, innovation, economic dynamism, and America’s continuing global leadership is blowing hot air unless they are aggressively committed to dismantling the institutions that loot minority communities and thwart their efforts to participate freely in our economic and political life.