Evangelicals and the Amish Option 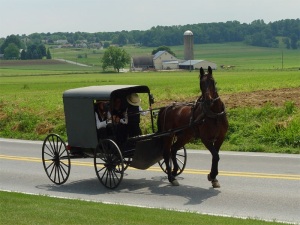 A close friend and fellow Texas ex-pat is looking to escape the godless Gomorrah of their affluent East Coast city. They want to move to the countryside, but the effort isn’t going so well. Their dilemma is emblematic of wider challenges faced by religious conservatives in a nation they are no longer able to dominate.

America has largely shed the authoritarian religious values that once imposed a kind of artificial uniformity on our national culture. Not everyone is thrilled with this development. Particularly in the South, where this dynamic was slowed in the 20th century by poverty and lingering battles over race, evangelicals and fundamentalists are accustomed to a degree of cultural sway that long ago disappeared elsewhere.

Christianity as portrayed in the Bible was a distinctly counter-cultural phenomenon, but Southern religious conservatives do not see themselves in that light. For those who imagine they live in a Christian nation, a wealthy, secular, globally-connected America is producing some hard choices.

Constantly pressured by a community that neither shares nor respects their religious values, life in the Northeast is a challenge for a Southern-fried Biblical literalist. Christmas is a materialistic show and Easter is a holiday about bunnies. Schools start teaching evolution very early. Kids as young as junior high have practically unfiltered, handheld access to the Internet, a cesspool of filth and religious doubts that reaches their children through their peers.

They feel that their community celebrates same-sex families, vilifies gun owners, undermines religious faith, and encourages government dependency. They want to be free from the clutches of this dangerous culture, but there’s a problem. This dangerous culture produces the wealth that keeps them affluent.

Their solution is to retreat to the countryside, but in the Northeast that doesn’t work quite the same way it would in East Texas. Property in a rural setting within an hour from work is actually more expensive than living in town. Commuting is difficult. Those rural spaces in the Northeast aren’t under-developed parcels of farmland. They are mostly weekend retreats for the affluent. Even if they could find a suitable property, the other practical and financial realities around living so far from the rest of their life are sinking in.

So why not just go back to Texas? It isn’t that simple. First, the same dynamic comes increasingly into play in Texas, Georgia or anyplace else you might go. To have a quality career you need to be close to a city. Houston may be more conservative than Philadelphia or Baltimore, but by a steadily decreasing margin.

Look hard enough and it is possible to get a well-paid STEM or financial services job in some patch of flyover country where you’ll be surrounded by people who think the universe is 6000 years old. However, your boss and all of the organization’s decision-makers will be somewhere else. To join them in a senior position you will probably have to leave. Choosing a “family friendly” setting means choosing financial instability over affluence and achievement. Religious conservatives increasingly find themselves forced to choose between their careers and their values.

Social conservatives have begun to paint this is an issue of tolerance, but that is a misconception. Lots of unique cultures survive and thrive in a globalized, urban America. Mainstream culture is perfectly willing to tolerate religious conservatives. Tolerance is not what they are looking for.

There are two unique characteristics of Christian religious fundamentalism in the US that create special problems. First, fundamentalists expect the wider culture to embrace, not merely tolerate their beliefs. The second problem is related to the first. This brand of Christianity is not merely a faith, but also a rigid matrix of factual beliefs in tension with reality. Being surrounded by a community of coreligionists is not merely a comfort. The uniformity that comes from a believing community is a practical necessity.

Tolerance isn’t enough. The fact that the wider culture is unwilling to transform itself in conformity with their demands is an affront. They imagine themselves as the last remnant of an authentic American identity. They are the “pro- American” bloc of Sarah Palin’s America. To be surrounded by a successful, prosperous culture that does not embrace their values is to pass every waking hour in a smothering swamp of cognitive dissonance.

The pain of cognitive dissonance is complicated by the need to shelter a brittle collection of factual beliefs. Free flow of information is the blood supply of global capitalism. For believers in Biblical literalism, information itself is dangerous. Controlling access to information is critical to maintaining the worldview at the center of their culture. It is extremely difficult, if not impossible, to control information in an urban capitalist setting.

Participating in that economic system means swimming in a sea of data and converting it into reliable insights. That critical/analytic process on which so much of the wider economy is built is inherently corrosive to religious fundamentalism. Conflict is inevitable.

Fewer Americans under thirty are embracing fundamentalism than in the past but, those who remain will likely be far more militantly committed. They will have to be.

As that commitment to a denialist religious agenda increases, their attachment to the rest of the culture will have to decline. A more explicitly counter-cultural wave of religious fundamentalism will likely pull back from the kinds of direct political engagement that marked the last twenty years. This is not the positive development that some people might expect. Less Moral Majority will likely mean more Bundy Ranch.

In time, religious fundamentalists in the 20th century mold may embrace the Amish Option. They might be found mostly in quiet redoubts away from centers of national power and wealth. Folks there may not be riding horse carts and building furniture, but they would develop a culture, economy, and identity decidedly separate from mainstream American life. Oklahoma and Alabama may develop into Utah’s poorer cousins.

In the meantime, my friends will probably stay in the Northeast, abandon their country dreams, and do their best to adapt. Like most traditional evangelicals, they aren’t so doggedly committed to their worldview that they’ll turn their backs on career, education, and ambition to escape from pluralism. They’ll chafe at city values while their kids grow up at peace with the wider culture.

A new, more hardened generation of religious extremists may take a more strident stand. Expect to see many adopt a version of the Amish Option, bypassing the advantages of wealth, education and influence available in mainstream culture in order to opt-out and protect their fragile beliefs. It is unlikely that this will unfold quietly. We could be in for a bumpy ride.

424 comments on “Evangelicals and the Amish Option”