Home › Economics › Immigration, wages and the future of ‘dirty jobs’

Immigration, wages and the future of ‘dirty jobs’ 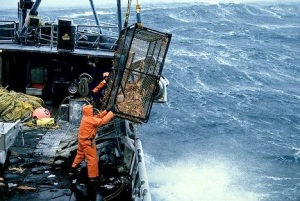 Crab fishing in Alaska can be a six-figure job. Workers in fish processing factories there earn solid middle class wages. Processing workers who work on a ship often get the opportunity to earn a share in the profits of the voyage, occasionally taking earnings much higher.

Fish processing at a catfish farm in Alabama seldom earns a worker more than minimum wage. The work is long, dangerous, and miserable. All across the south, agriculture and food processing are a big business, but hard work earns lousy money, abusive treatment, and minimal benefits.

We could end illegal immigration with a simple market solution – impose a premium on immigrant labor. The reason we are not going to adopt this simple solution becomes evident by comparing labor conditions in Alaska to the economics of work in the Deep South.

Debates over immigration often pivot on the belief that Americans are not willing to do dirty jobs. The reality is that Americans commonly perform harsh, dirty, dangerous work. They just insist on getting reasonable compensation and decent treatment. They are not sufficiently desperate and powerless to submit to the kind of abusive, semi-slave employment terms endured by illegal immigrant laborers.

In the Mississippi Delta, employers have ready access to a pool of politically powerless illegal migrants willing to endure almost any form of abuse. Employers in Alaska have relatively little access to desperate foreign labor. Until recently, they were able to use a limited supply of “student workers” on J-1 visas. That sham was shut down by the Administration as part of the wider crackdown on immigration abuses. Getting from Latin America to Alaska means crossing three international boundaries and thousands of miles. Alaska is not a realistic option for mass illegal immigration.

To further complicate the picture for employers in Alaska, permanent residents there also benefit from a modest minimum income derived from their share of the state’s massive oil and gas revenues. People there have enough power over their own lives to resist enduring terrible treatment and exploitation. Ask them to do a dirty job and they may do it, but they will insist on getting paid.

The situation in Alaska has an impact on consumers. How much does catfish cost at the grocery store? How much will you pay for king crab or Alaskan salmon? We can and should fix our problem with illegal labor. We should realize, though, that ending this problem will mean changing the shape of our economy in important ways that will cost us money. Finding a reasonable solution requires us to recognize the true scope of the effort.

Across vast segments of the economy, the availability of exploitable illegal immigrant labor is a fundamental assumption of many business models. These laborers are reviled, tormented, and harassed. Ugly cynics build successful political careers stirring up hostility against them. Their children are locked out of access to education and basic community resources wherever possible. They are kept poor, powerless and – most importantly of all – available.

No solution to this problem is waiting on the border. “Border security” is a cynical ploy, a way to score political points without having to change anything. America’s illegal immigration problem is just like its drug problem. It has nothing to do with security or law enforcement and everything to do with economics and demand.

The solution is simple, immediate, and final. Change the economic incentives and the problem becomes an opportunity. Open access for people to come here and work, but make their labor relatively expensive. It is a simple solution, easy to implement, and it would work.

Politicians are not even considering this approach because solving the problem of illegal immigration would upset powerful interests all over our economic system. The kind of simple, minimum-wage based solution that would end the problem of illegal immigration would also radically shift the balance of power in our economy. Imagine how our lives would change if dirty, dangerous, miserable jobs commanded the wages it would take to hire American workers?

Ending the flow of semi-slave labor into our dirtiest, most miserable industries will impose some hefty costs on consumers in the short run that will probably flatten out or drop in time. Along the way, that shift will open new opportunities in higher-wage careers and revive the fortunes of our disappearing working class.

In the short run, some products might disappear completely from stores. Many mass growers might stop planting strawberries or other fruits and vegetables altogether. Apples, blueberries, oranges and other foods might become much more expensive. A large number of restaurants would see their business models become immediately unsustainable and close. Labor shortages for work like roofing, janitorial services and other labor that is currently very cheap would have serious effects on consumers.

What might emerge in the wake of this shift are different business models for food processing, agriculture, construction and restaurants that pay workers much more than in the past while employing fewer people. There would probably be many more restaurants in which you clear your own table while a traditional high-end restaurant experience might become far less common. Smaller scale urban farms might find themselves facing much more favorable economics as the mass farming of certain crops dependent on underpaid labor disappears. Home building and maintenance would require new innovations to remain affordable.

Workers who perform dirty, dangerous, difficult work not easily automated would probably begin earning much higher incomes and enjoy a great deal more power over their own lives. Some products would cost more. Some products would disappear. Some new types of work and new innovations would emerge that we cannot readily anticipate. Ordinary Americans who struggle to earn a living today would make a lot more money. In short, we could move on to face new, better problems.

We could accomplish all of this by harnessing market forces to work their magic. Mandate a higher minimum wage across the board, an even higher wage for non-citizen labor, and place easy, enhanced wage enforcement power in the hands of the workers themselves, legal or illegal. Such measures would, for the most part, price illegal workers out of the job market and make labor exploitation too risky for the market to bear. Illegal labor would still exist around the extreme margins but it would cease to be a mass phenomenon.

Don’t expect to see anyone proposing this approach anytime soon. Decisively shifting power toward workers would change the relative power and rights of low income, low skilled workers all over our economy.

Preventing Mexicans from coming to America is a policy that appeals to Tea Party fanatics. Giving workers, regardless of where they come from, more power over their own economic futures absolutely does not. That’s why Rick Perry is posing in front of machine guns instead of proposing solutions that would end illegal immigration.

Real solutions are available that would bring substantial benefits to accompany their costs. If we are ready to pay $1 per strawberry or buy them from a local grower only available in season, we could have a very different labor market and a very different, more prosperous country. Demogoguery is cheap. Solutions are expensive.

680 comments on “Immigration, wages and the future of ‘dirty jobs’”