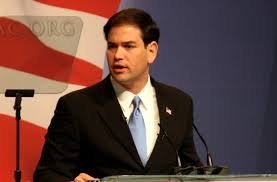 Florida Senator Marco Rubio today commemorated the 50th anniversary of Johnson’ War on Poverty with a speech outlining a new approach to the social safety net. What that approach actually is remains to be seen, but his vague comments hint at shift in policy that has been bubbling through the right for almost a decade.

His speech may have been short on details, but it was remarkable for some of the facts he acknowledged.

Today, the debate on poverty is primarily focused on the growing income gap between the rich and poor. From 1979 to 2007, income for the highest-earning Americans grew more than it did for anyone else. From 1980 to 2005, over 80% of the total increase in income went to the top 1% of American earners.

These are indeed startling figures, and they deserve attention.

This is common knowledge across the country to almost everyone, except for Republican politicians. For a GOP Senator to even acknowledge these facts is a bit of a shock, and enough to earn some immediate criticism. But he went on:

A lack of education is contributing to inequality in other ways as well. The jobs that have replaced the low and middle skill jobs of the past pay more. But they require a high level of professional, technical, or management skills. And we simply have too many people who have never acquired the education needed to attain those skills.

What’s worse, children from lower income families are the least likely to get an advanced education. The result is a vicious cycle of intergenerational poverty.
[…]
Our modern day economy has wiped out many of the low-skill jobs that once provided millions with a middle class living. Those that have not been outsourced or replaced by technology pay wages that fail to keep pace with the cost of living. And even many of the middle-skilled white- and blue-collar jobs have also been lost to automation or shipped overseas.

At least until a few decades ago, our economy proved sufficiently dynamic and innovative to replace old jobs with new ones. But this hasn’t happened in recent years.

This one is a shocker. Everyone on the right knows that poverty can only come from bad choices and everyone has the same opportunity to succeed in America. The unemployed are just lazy people sitting at home soaking up tax revenues earned by good white folks. We are supposed to believe that jobs and good moral values would materialize if the checks stopped coming. Expect him to get some blistering criticism over this one.

Then come the proposals. Hiding inside the anodyne talk about “Washington elites”, bureaucrats, states’ rights and the need for family values was a nugget that sounds an awful lot like a minimum income. Here’s how he described it:

This would allow an unemployed individual to take a job that pays, say, $18,000 a year – which on its own is not enough to make ends meet – but then receive a federal enhancement to make the job a more enticing alternative to collecting unemployment insurance.

Unlike the earned income tax credit, my proposal would apply the same to singles as it would to married couples and families with children. It would also be a preferable means of distributing benefits since it would arrive in sync with a monthly paycheck rather than a year-end lump-sum credit. And it’s a better way of supporting low-income workers than simply raising the minimum wage.

Where have you heard that before?

Are Republicans finally warming to the merits of a minimum income?

67 comments on “Did Sen. Rubio just endorse a minimum income?”